A plea to Britain: don’t forget Tibet in your dealings with China | Lobsang Sangay

Britain has a fine history of upholding the democratic values of our fine country. It must do once again as it negotiates business and trade ties with Beijing

When it comes to its dealings with China, the UK is at a critical juncture. Following the Brexit vote, the debate on Chinese investment in Britain, and unfavourable media coverage of President Xi Jinping’s lavish reception last year, the challenge for the British leadership now is to develop a new strategic engagement with Beijing. It is vital in doing so that the UK stands its ground, alongside other like-minded governments, and promotes an approach that balances its business, trade and diplomatic interests with a respect for the rights of the Chinese and Tibetan people. It must hold fast to its commitment to upholding the democratic values that shape the spirit of this great country.

I have recently been elected to serve a second term as the sikyong, or political leader, of the Central Tibetan Administration, based in exile in India. Our democracy, which is a source of great pride among Tibetans everywhere, was a culmination of the vision and actions of His Holiness the Dalai Lama – who has emphasised the importance of democracy and education since his escape from Chinese-occupied Tibet in 1959.

Britain has been an inspiration to Tibetans not only as one of the world’s oldest democracies and a bastion of free speech, but also because of its has a special relationship to Tibet. Prior to the Chinese invasion in 1949, Britain was the only country to formally recognise Tibet as an independent nation. This is because British representatives were stationed in Lhasa from 1904 to 1947 to liaise with the Tibetan government. In 1949 Mao Zedong, the newly victorious leader of the Chinese Communist party, announced over the radio waves his intention to “liberate” Tibet from this “foreign imperialism”. Over the past 60-plus years, of course, Tibet has been anything but “liberated” by the Chinese Communist party.

In 2008, Britain rewrote the historical record on Tibet. An apologetic statement by the then foreign secretary David Miliband stated that Britain now recognised Tibet as part of the People’s Republic of China, after almost a century of recognising Tibet as “autonomous”, with China having a “special position” there.

This was a major shift in position, and signalled the beginning of a more accommodating stance. But it only led China to push for more concessions, limiting the UK’s leverage still further. After David Cameron met with the Dalai Lama in 2012, China subjected him to censure, consigning him to the diplomatic deep freeze. Last year, the UK’s red carpet reception of Xi was widely criticised, with sinologists pointing out that standing up to China is not only preferable for moral reasons but is also in the interests of Britain’s economy and national security. 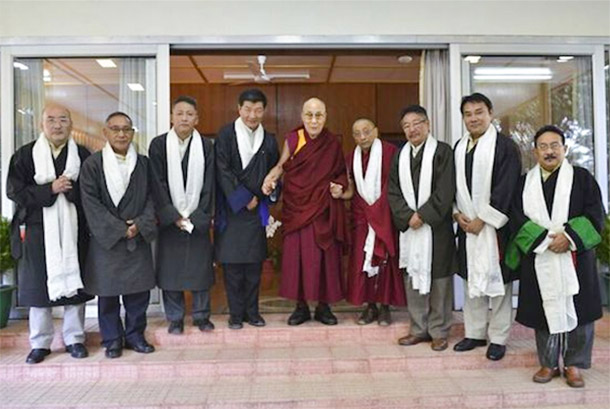 How much better, instead of struggling in the face of China’s efforts to divide and rule, if those governments that China coerces stood shoulder to shoulder, bound by their common values. Failing to do so only endorses China’s efforts to impose its narrative on the rest of the world – a discourse that is anti-democratic, in which the law is viewed as a tool to maintain power and not to achieve justice, and one that is hostile to any views that do not accord with the official party line. The need for such a joined-up approach is becoming ever more urgent – regardless of Brexit – as the Chinese government continues to oversee an unprecedented crackdown on basic human rights and civil society, and steps up its efforts to subvert and undermine the values of western democracies.

In Tibet, China asserts its control through policies of intensified militarisation, hyper-securitisation, enhanced surveillance and ideological campaigns. Given Tibet’s importance as the “roof of the world”, source of most of Asia’s major rivers and epicentre of climate change, this should be of profound concern to us all. China’s disregard for fundamental freedoms is demonstrated in the continuing large-scale demolitions at the internationally renowned Tibetan Buddhist institute Larung Gar – the largest Buddhist academy in the world.

In recent months we have seen two initiatives where governments have joined together to tackle China about major issues of concern; the first a letter signed by four governments and the EU, telling China that its new laws on cyber-security, counter-terrorism and control of foreign NGOs go too far, and an unprecedented joint statement by 12 governments at the United Nations human rights council, criticising China over its detention of lawyers and disappearances of Hong Kong booksellers.

As China seeks to bend the rest of the world to its anti-democratic principles, such collective statements can only be in the interests of the UK and other European nations, as well as serving the Chinese and Tibetan people who struggle for peaceful reform of a one-party state.

British people are among the most staunch supporters of our Tibetan cause; tens of thousands of them joyfully sang happy birthday to the Dalai Lama at Glastonbury last year. So many have expressed their profound sadness at the unprecedented wave of self-immolations that has swept Tibet since 2009 – a terrible act that is testimony to often unbearable oppression as well as an expression of the desire for freedom, and for the Dalai Lama to return home.

As new alignments form and the ramifications of Brexit become clearer, it is time for a re-evaluation of Britain’s engagement with China. There may have been a change in language on Tibet, but the historical and cultural connection between the British people and Tibetans is irrefutable.

The UK should take a leading role in reaching out to other like-minded governments, to act together from a position of strength to confront the Chinese leadership. A united front can be used to push for a meaningful dialogue based on the Central Tibetan Administration’s middle way approach to resolve the longstanding issue of Tibet. It cannot allow Brexit to distract or damage relationships with other EU nations that will be needed if change is to be secured.

Dalai Lama: Behind Our Anxiety, the Fear of Being Unneeded