Tibet is a place, tucked high up on the northern side of the Himalayas shrouded in mystery.

Few people I know have travelled to Tibet and few are familiar with its rocky, rugged mountain-scape, vibrant city landmarks and peaceful and relaxed culture. 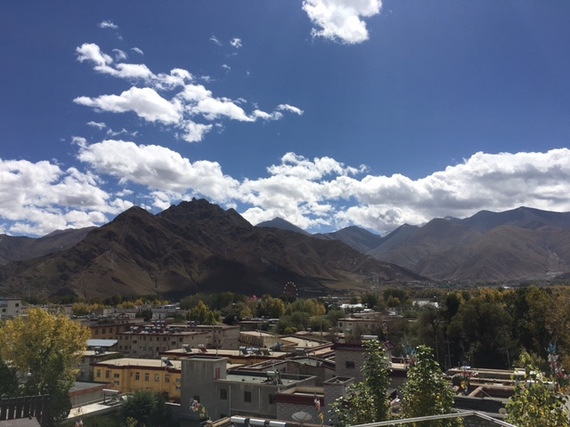 Only open to tourists since 1986, people are clambering for an insight into this faraway land, which while it has been at the centre of a territory dispute for decades is still largely unknown territory.

The journey for us, was an incredible, once in a lifetime experience at the place they call “The rooftop of the world.”

First, a few quick facts: 90 per cent of people in Tibet are ethnic Tibetan Buddhists. They have roamed this harsh and unique part of the earth for some 21,000 years. Tibet is on the Tibetan Plateau, the highest region on earth and spans over 1,200,000 square kilometres! Comparably its population is small. Just over 3-million. Lhasa is the capital and stands at 3,610 metres above sea level. (That’s 11,840 feet!)  Mount Everest the world’s tallest mountain holds stake on the border of Tibet and Nepal and is about 700 kilometres away from Lhasa, (so no, unfortunately we didn’t make it to the mighty mountain).

Despite, many articles encouraging us to catch the train to Lhasa, in order to acclimatise along the way for our Tibet tour — experienced and long time visitors to Tibet, insisted flying would be less taxing on our bodies, therefore making us less susceptible to altitude sickness.

Because of its height above sea level, the air is thinner, leaving you less oxygen to breathe (In fact: Once you move above about 13,000 feet, oxygen levels are only sixty percent of those at sea levels) and our bodies need to make a lot of changes to cope with this new environment. 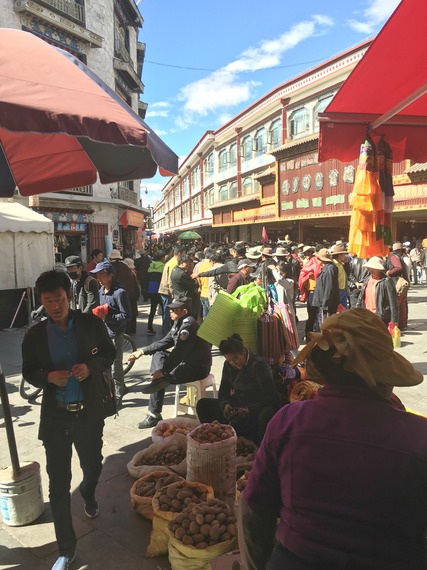 So with time of the essence we were happy to take the three hour flight from Xi’an.

As we drew closer to Lhasa, peeking out the aeroplane window had me in awe; jagged, mountainous ranges stretched out for miles before us in all their golden glory!

Arriving at the airport was reasonably straightforward; after collecting our bags, we were ‘scanned out’ of the airport by local military. Here we had to show our permits to tour in Tibet. No one is allowed in the arrival area, so our tour guide ‘Lobsang’ was waiting patiently outside for us. To tour Tibet, you must have a permit and a tour guide with a pretty solid itinerary from the travel agent.

Outside, we were immediately taken aback by the blinding sunlight and the brilliant, piercing blue sky. Standing on the roof of the world felt fresh and despite the crisp autumn temperatures, the sunshine was warm on our shoulders.

The drive to Lhasa was about forty minutes and to my surprise, the entire way, craggy, boulder-like mountains flanked either side of us.

We went smoothly through one military check point, where our passports and permits were checked and then on to the city. At first glance, Lhasa didn’t seem too different to other cities we’ve experience in China. Three wheeler Tuk Tuks, motorbikes piled high with people and paraphernalia, street stalls, ramshackle laneways and neon signs (the one obvious difference, Tibetan writing on the top and Chinese on the bottom).

It didn’t take long though, to work out, that beneath the surface, Tibet is an entirely different kettle of fish.

Apart from hotel brands, there are virtually zero western brands; the likes of McDonalds, Starbucks etc that you see cropping up all over China are yet to penetrate this peaceful plateau.