DHARAMSHALA: The Tibetan diaspora across the world celebrated the joyous occasion of its 56th anniversary of Tibetan democracy day today. At Dharamshala, the seat of the Central Tibetan Administration, the occasion was marked with an official function at Tsuglagkhang attended by Tibetan Justice Commissioners, Tibetan parliamentarians, members of the Kashag and Tibetan officials along with the public.

In his address, Sikyong Dr Lobsang Sangay spoke briefly about the evolution of Tibetan democracy and highlighted His Holiness the Dalai Lama’s vision and constant efforts in steering the democratic institution of Central Tibetan Administration towards success. 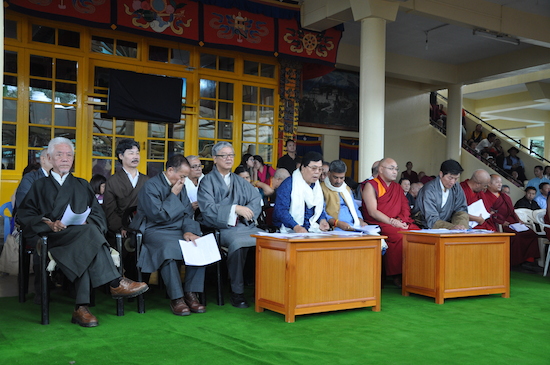 “Before the Chinese occupation of Tibet, His Holiness the 14th Dalai Lama set up a reform committee in an attempt to make structural changes in the Tibetan political and administrative system and transform them into a modern democratic institution. But owing to many formidable challenges the changes weren’t implemented. However, soon after his arrival in India, His Holiness followed his vision by making the political system of exile Tibetans a democratic institution,” Sikyong said.

“In 1960, on this very day, the Tibetan parliament-in-exile was established with the assumption of responsibilities by members of Tibetan Parliament elected from three provinces and various religious sects representing Tibetans inside and outside Tibet. Henceforth, the Tibetan democratic system progressed and matured into a full-fledged democratic system, and this is due solely to the pioneering and visionary efforts of His Holiness the Dalai Lama over the last 56 years. So I take this opportunity on behalf of every Tibetan to express our heartfelt gratitude to our most revered leader.”

Sikyong also urged the Tibetan public to fulfill His Holiness the Dalai Lama’s sacred aspiration to forge internal harmony and unity among the three traditional provinces of Tibet, and be mindful of the responsibilities that come along with democratic rights.

“Likewise as citizens of a democratic institution we need to be mindful of the fact that while democracy bestows us with the rights it also expects us to shoulder our responsibilities. Like two sides of the same coin, rights and responsibility are closely entwined. Democracy confers you with the right to speech and freedom of expression and in a democracy diversity of opinion should be respected. But these rights and privileges shouldn’t be misused. As much as democracy gives you the right and freedom, it also demands accountability, ownership and agency. Engaging in acts of defaming His Holiness the Dalai Lama and leveling unfounded criticism against the CTA is an affront to the gift and tenets of Tibetan democracy,” Sikyong said.

f His Holiness by strengthening the foundations of Tibetan democracy.

A plea to Britain: don’t forget Tibet in your dealings with China | Lobsang Sangay

Dalai Lama: Behind Our Anxiety, the Fear of Being Unneeded